A. Outline the focus of  your inquiry and provide background knowledge. Why is this an important and significant questions to ask about the past? Provide evidence from primary and secondary sources.

Inquiry Question: How did the arrival of the “Filles du Roi” or “King’s Daughter’s” impact today’s French-Canadian society?

The Filles du Roi were a group of about 800 women who were among the poorest in France. They were sponsored by the King Louis XIV to immigrate to Canada (New France) between 1663-1673 in order to correct the gender imbalance and populate the land.

This is an important and significant question to ask about the past because the French-Canadian culture, as well as the population, that is apparent Canada were largely due to the arrival and settlement of these women. Without the Filles du Roi, New France’s population may have dwindled or died off due to the lack of females in the land. Canada would have have the thriving Francophone community it has today.

It is difficult to find primary sources of information on these women. as CBC.ca says: “There are very few first-hand accounts of the lives of the Filles du Roi. Few of them could read or write. Their histories have largely been told by subsequent generations. That said, one thing we know with absolute certainty: the Quebec we know today owes a lot to the fortitude of these incredibly tough women.”

Cause and Consequence: Why did your researched questions happen the way they did and what were the consequences?

In order to gain control of the fur trade along the St. Lawrence river, New France required a higher population. Their British competitors had a more open policy of who could arrive to the colonies from Britain, and had about 18 times as many settlers as New France. New France had a ban on Protestants coming to the new land.

Britain’s population grew while New France, which had one woman to every six men, was not.

Jean Talon, the Intendant of the colony, delevoped a plan with King Louis XIV to import women to the colony to marry male settlers. Most of the women were poor, many were orphaned. These women would become the Filles du Roi or “Daughters of the King”. One in ten of the women died on the journey, but around 800 survived to settle in New France. 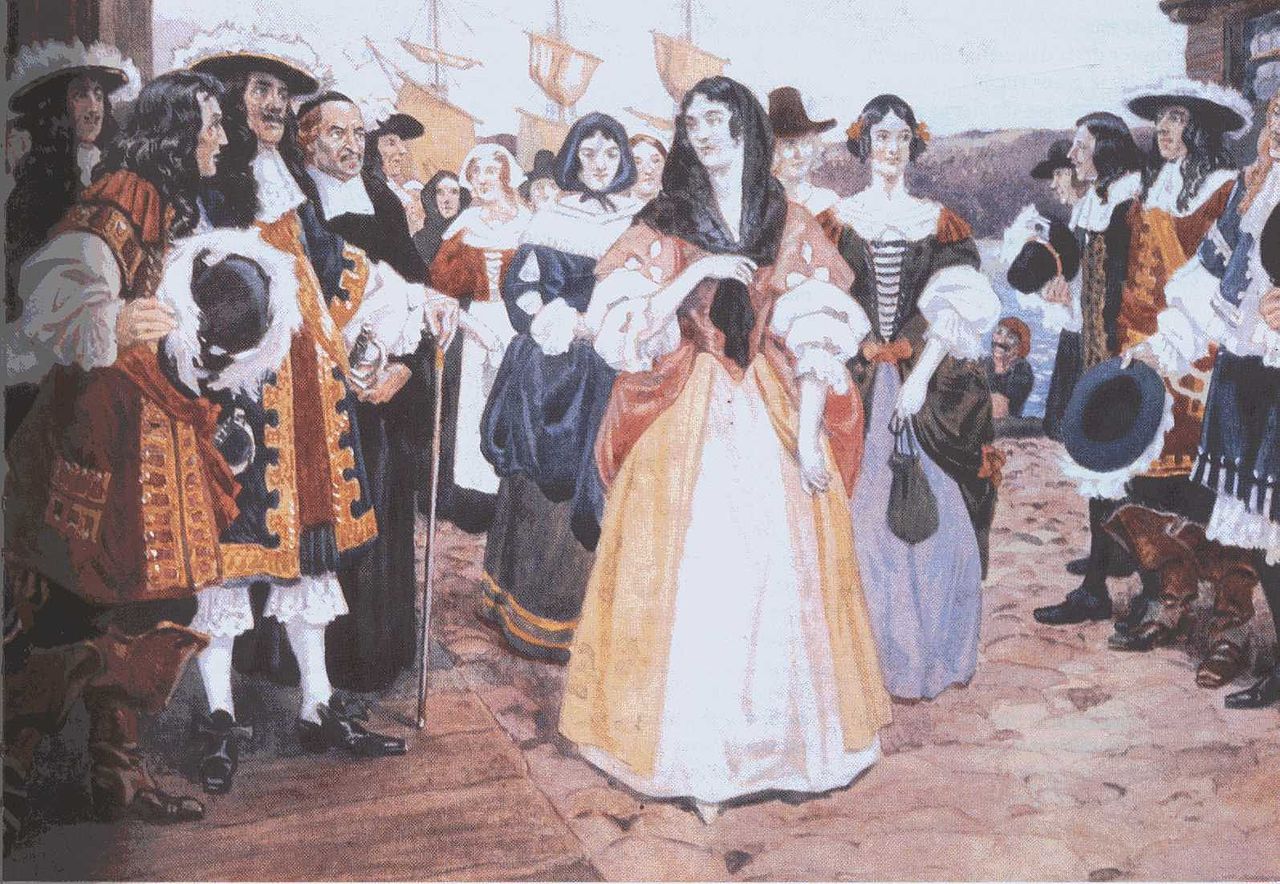 What happened was right and fair, according to the standards of the time. A majority of the women were relocated form a desolate, poor, orphaned life to one that held potential spouses, families, and a longer, richer one. Many were given a dowry of 50 livres (equivalent to around $1,000 today).

However, if this event were to be proposed today, there may be much more controversy surrounding it. In current Canadian culture, it may seem ethically unsound to pay people to pair off in such a calculated fashion. The proposition also perpetuates heteronormativity, and does not take into account possible LGBT members from both sides. In the 21st century in Canada, people generally marry for more complicated reasons than just reproduction. The model of the Filles du Roi puts the people involved in danger of abusive or unhealthy relationships that are difficult to escape. Additionally, one in ten women died on the voyage from France to New France (Canada). This would be frowned upon today – it’s expected that one people get on a ship, they should be able to get off the other side. There were fatalities in this event that would be considered tragic today.

The voyage reminded me of other minority groups in history who have been subjected to unsafe journeys across the sea in order to fulfill the desires of others. One example is the transatlantic slave trade, which also resulted in fatalities.  Though the quest and destiny of the Filles du Roi was different than that of slaves, I see a connection between their predicaments. I do not believe that the formation of the Filles du Roi would be looked upon as a good decision if it were to happen today.

B. What conclusions can you make about your questions based on the research your conducted?

The arrival of the Filles du Roi impacted not only the current French-Canadian society, but Canadian society as a whole. After their arrival, the country experienced the biggest population growth in Canadian history. Thanks to them, the society was able to continue to grow and thrive. The Filles du Roi were an integral part of the growth of Canada’s people and their legacy should not and cannot be excluded from history.